Affiliate Disclaimer: As an Amazon Associate we earn from qualifying purchases.. That means if you make a purchase through any of these links, Gear Smartly earns a small commission.

How to set time on Fitbit device? It is pretty a simple task. Let us go find out how to change time and date and time zones if they are shown incorrect in your Fitbit device.

Fitbit is a reputable brand that makes fitness and sports wearables – fitness activity trackers and smartwatches. Most athletes, fitness enthusiasts, outdoor sportsmen and women have one model of Fitbit or the other.

While they use their Fitbit devices to track their everyday fitness levels, some Fitbit users sometimes get wrong time display. Sometimes, the Fitbit time is still wrong after syncing with a paired phone.

How to change time on Fitbit is straightforward, but let us figure out why your Fitbit fitness tracker could be showing incorrect time even after factory reset. 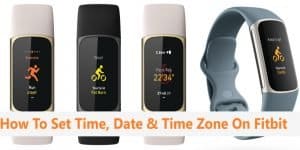 Why won’t my Fitbit show the correct time?

Why are you seeing wrong date and time on Fitbits? Whether you have Fitbit Versa, Fitbit Charge, Alter, Ionic, Surge, blaze, Ace, Zip, or Flex tracker,  Fitbit devices for the most part, are incredibly consistent in timekeeping.

This is observable, especially when you’ve entered a different time zone.  However, they’re not very perfect. There are some possible causes why you’re experiencing wrong date and time on Fitbit, which to me is very annoying.

So Why won’t my Fitbit show the correct time?

1. Fit does not support your paired device

You can’t still tell figure out why your Fitbit watch is still showing inaccurate time and date? Fitbit has the expertise in making advanced fitness trackers and smart wearables. There is no reason why my Fitbit shouldn’t display correct time except for slight software or firmware glitches. If your paired phone is not supported, re-sync your Fitbit sport watch and it will still be displaying the wrong time.

3. You entered into a new time zone

Dis you recently travel between different time zones with your Fitbit device? If for example, your Fitbit charge HR is exactly about 4 hours off from the correct time zone, you probably have migrated from one time zone or country to another. That is common for frequent multi time zone travelers. Have just a little patience, and we’ll show you how to set time zone on Fitbit devices.

Again, if you recently got a new Fitbit device, you have to configure it and do the proper setting before time runs smoothly. Until you set your time correct time zone, sure, your Fitbit will still not be displaying precise time. You’ll also learn how to set clock on Fitbit watches.

Finally, if you want to track dual time–international and local time, you would have to switch between the regular 12hour time and the 24-hour military time (international time) like in a GMT watch. This article is going to guide you on how to set military time on Fitbit trackers.

Quick Guide: How to set time on Fitbit charge 5

Here is a quick guide if you are in a hurry. It’s a video on how to se time on Fitbit charge 5 advance fitness and health tracker.

How to set time on Fitbit with Mobile App

If my Fitbit charge HR is not showing correct time and date, I can set the time through mobile app. This technically means I have to sync the tracker with the compatible smartphone.

Syncing with the paired device will automatically set time on Fitbit according to the time zone where you are located. The correct time and date will get updated automatically when syncing is done effectively.

Make sure your phone and the Fitbit device are within the Bluetooth range to keep connectivity active. Also, make sure the time zone and location are correct, so that you won’t end up with another wrong time.

How to change time on Fitbit manually

Steps on how to adjust time on Fitbit manually on phone

How to change time on Fitbit manually online using a computer

Read More : How Accurate Is Your Fitbit Calorie Burn Tracker? Find Out In 1 Step

How to set clock on Fitbit Charge 5 – change clock face

One of my friends experienced a “Clock Error” on his Fitbit Blaze, which required that he should change the Fitbit clock face. Here is the step I will take to change the Clock Face on My Fitbit.

Read More : Why is my Fitbit not charging or turning on?

How to set time zone on Fitbit

If you want to change to a new time zone on your Fitbit device, so that it fixes to correct time , here is how to do it.

How to set military time on Fitbit or regular 12-hour

You can switch between time formats on Fitbit device, but unfortunately, you cannot do that from the Fitbit app. The only solution is to log into your Fitbit account online and do the time format setting.

How to reset time on Fitbit Flex online

Fitbit Flex  is a popular wristband-style fitness tracker for monitoring sleep. It may display wrong time and this is how to correct the time on Fitbit flex.

Read More: Is Fitbit waterproof Rated For Pool and Shower?

How to reset time on Fitbit Ace 2 Tracker

Go to your Fitbit account dashboard or Fitbit app

How to reset time on Fitbit Alta – using an android phone

How to reset time on Fitbit Ionic from iPhone

Fitbit ionic has many watch clock faces that are easy to customize. Here is how to sync your Fitbit ionic with iPhone if you want to adjust time and fix incorrect time zone issues.

How to set time on Fitbit Charge HR Fitness watch

According to one Fitbit fan, “My Charge HR is exactly 4 hours off from my current time zone and it is giving wrong time and date” If you have done all that you can and still, the time display is till incorrect, factory reset is one way out.

If you have once adjusted time on your tracker successfully, how did you fix it? Well, one user gave an impressive and intuitive solution. All is simply to hard-reset the whole wearable.

Completely delete your Fitbit Charge HR from your account and start adding it back again as a new one. This will wipe out all the settings and may be data if you take a full factory reset.

Then, you begin to re-install your Fitbit charge HR as if it was a new device. This method gets the incorrect time issues fixed. It may be risky as it can clean all your workout and health data, but at least it worked.

Read More:  Fitbit Water Lock – How To Get Fitbit Out Of Water Lock Mode

How to change time and date on Fitbit – Video

Other ways How to fix time in Fitbit trackers

If you have done all that there is in this guide and the Fitbit still indicates wrong time and date or incorrect time zone, try out these few hacks to make the Fitbit change time and date correctly.

How did you fix a wrong time on your Fitbit device?